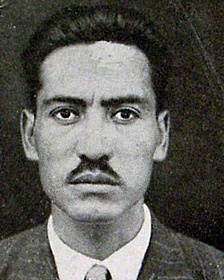 Antonio Pujol was born in Chalco. He was a pastor until 1929 when he started his studies at the Academia de San Carlos. He was a member of the Liga de Escritores y Artistas Revolucionarios (LEAR) from 1934 and until 1937. He worked on several murals for the Abelardo Rodriguez Market. In 1936 he was a delegate for LEAR at the American Artists Congress in New York. Along with David Alfaro Siqueiros, Roberto Berdecio and Luis Arenal he organized the Siqueiros Experimental Workshop. In 1937 he traveled to Spain where he joined the International Brigades. He worked again with Siqueiros and Arenal on a mural for the Electrician Syndicate in Mexico City in 1939 and 1940. He lived in Argentina and Uruguay from 1942 and until 1959 after having participated in an attempt to assassinate Leon Trotsky. He came back to Mexico in 1959 where a year later he joined the TGP.

Do you have a work by Antonio Pujol that you wish to sell. Please fill out the form here