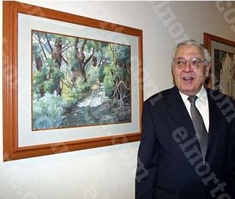 Born in Torreon, Coahuila, Mexico. Antonio Lopez Oliver started painting in the mid 1940's and held his first public exhibition in 1949 at the Asociacion de Artistas de Coruña in Spain. A few years after his first show he was awarded First Prize in their Watercolor Salon. He is considered one of the best watercolor artists in Northern Mexico along with Fernando Fuentes and Manuel de la Garza. He currently shares his time between his studios in Monterrey and San Luis Potosi, Mexico.