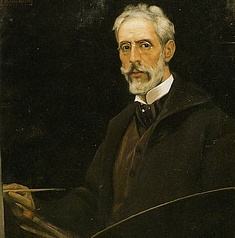 Born in Barcelona Spain in 1854. Art ran in his veins, since was the son of a draughtsman and nephew of a silversmith. At the age of 13 he started studying at the Escuela de Bellas Artes in Barcelona and when he turned 21 he received a grant to study in Rome. Although he started making sculpture he soon found his great ability in painting. He joined a group of painters who were known for their extreme realism and attention to detail headed by Mariano Fortuny. They thrived on the bourgeois need of paintings with exotic oriental and medieval themes. After living 10 years in Italy he went back to Barcelona in 1886 and later moved to Paris in 1894 where he opened a large studio with all the props needed to create rich scenes for the wealthy.

Do you have a work by Antonio Fabres that you wish to sell. Please fill out the form here