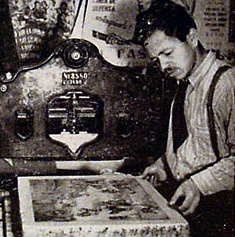 Known as the "Artista del Pueblo" this genius printmaker, was born in Mexico City in 1911. He held various jobs to make ends meet, like bus attendant, butcher assistant, barber and even house painter. In 1928 he studied art at the Academia de San Carlos night school. His formal career started when in 1935, he painted the ceilings of the Abelardo Rodriguez market. He was a member of the Liga de Escritores y Artistas Revolucionarios (LEAR) and a founding member of the Taller de Grafica Popular (TGP) in 1948. He made murals in Sinaloa, and along with Alfredo Zalce in Puebla. At one point he left for a long period of time to live with the huichol Indians and in 1945, published the Ritos de Los Indios Huicholes, a portfolio of lithographs about the life and rituals of these people.
In 1960 he was awarded a First Prize for Engraving in Buenos Aires, Argentina. His work has been exhibited in America and Europe. There has been two homage exhibitions in his honor by the Casa de la Cultura in Michoacan in 1979 and the TGP in 1987.