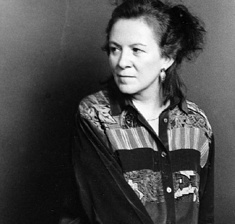 Ana Mercedes Hoyos was born in Bogota, Colombia on September 29, 1942. She studied at the Universidad de Los Andes under the direction of Juan Antonio Roda, Luciano Jaramillo, Armando Villegas and Marta Traba. Her professional career as an artist started in 1968 when she got awarded the second place prize at the Primer Salon de Arte Joven. This notoriety gave her the push she needed to exhibit in places such as Havana and Caracas as well as her native Colombia. A year later she finished the series Ventanas and Atmosferas which are hailed as the artist's best works. In 1978 she was awarded First Prize at the Salon de Artistas Nacionales.

The work of Ana Mercedes Hoyos is heavily influenced by Pop Art but stays true to her native South American context. It's a world of vivid color and clear lines. Her subject is for the most part fruit with some daily life mixed in. Today, this accomplished female artist is considered as one of the most important to come out of Colombia in the 20th Century. Her work is part of major Museums as well as important private collections throughout the world.

Do you have a work by Ana Mercedes Hoyos that you wish to sell. Please fill out the form here