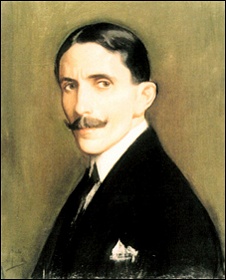 Ramos Martínez was born in Monterrey, Nuevo Leon, on November 13th, 1871, although the birth date is commonly misquoted as 1872 or 1875, and died in California, U.S.A. on November 8th, 1946. He studied at the Academia de San Carlos as well as under the direct supervision of 19th. century master Santiago Rebull at México City's National School of Fine Arts. While living in Paris, in the first decade of this century, Alfredo Ramos Martinez was in touch with the different European vanguards of that time: impressionism, postimpressionism and symbolism; these trends influenced his later work. He had a very important role in Mexican art; he founded the Escuela de Pintura al Aire Libre, where other important artists such as Fernando Leal studied. The School was, in a certain way, a response to the extremely academist trends of the Academia de San Carlos, as well as the assimilation of European influence of taking the easel to natural scenes in order to reflect on the essence of light, color and forms, as seen in impressionism. Once successful on both sides of the Atlantic, he moved to Los Angeles California, to provide his daughter Maria first world medical treatment for a disabling spinal disease. It is said that he went around to different doctors in Beverly Hills, often painting frescoes in their homes in exchange for medical treatments for Maria. He exhibited frequently and also painted murals such as a monumental 100- foot work executed at Scripps College, and the 45 foot long "El Dia del Mercado" painted in 1938 for a Coronado restaurant and restored by Nathan Zakheim, in the early 1990s. This last mural was eventually split into sections, one of which went to producer Joel Silver and is displayed in his Brentwood home. He also had residential mural commissions from such Hollywood celebrities as screenwriter Jo Swerling, designer Edith Head, and director Alfred Hitchcock.