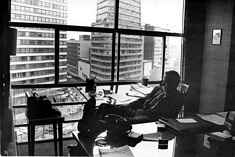 Born on December 13, 1920 in Monterrey, Mexico. Abel Quezada moved to Mexico City in 1936 and became a leading Mexican political cartoonist and painter since 1943. He lived in NYC from 1946 and until 1949 His work was published in Mexico's prominent newspapers such as Excelsior, Novedades and Ovaciones. In the US his work was featured in the covers of the the New Yorker over 12 times. Retrospectives of his work were held in the Museo Rufino Tamayo in 1984 and the Museo de Arte Moderno in 1985. There were other exhibitions of his work in Paris, Milan and Geneve in 1990. He died of leukemia in his home in Cuernavaca on February 28, 1991.

Do you have a work by Abel Quezada that you wish to sell. Please fill out the form here